Two piece snooker cues that are jointed in the middle. We have a wide range of styles and prices to suit all players.

We have been selling cues for over 20 years as well as manufacturing some of our own products so our expertise has enabled us to put together a great range of two piece snooker cues. 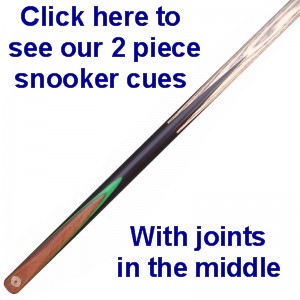 Two piece snooker cues with joints in the middle are very convenient to take either to the snooker hall or to away matches if a player plays at different venues or in a local league. You can purchase a  cue case that will carry the cue and cue extensions that will give a player everything they want and can easily carry around.

We are still adding to our 2pc cue and case deals but if you would like to see what we have at the moment, Click here. Very often there are big savings to be made if you buy the cue, extensions and case all together. 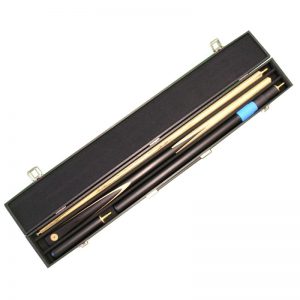 The jointing of two piece snooker cues has improved greatly since the 1980’s when two piece snooker cues were at their most popular. For a start, the joints are now nearly always made of brass and very occasionally steel, where as there was a time when many of the cues had wooden joints. The wooden joints were lighter but they were obviously not as strong and because wood `moves` with the change of temperature it effected the joints which often became tight. That is not to say the wooden joints `wooden work`, if you pardon the pun. They were cleverly designed and some readers of this might actually still own two piece snooker cues with wooden joints. Like everything design improvements are made when they can be, and now joints are much more secure and are better fits so the player really should not even notice the cue is jointed when playing. The better quality cues will always having `matching grain shafts` when they are jointed. This means the same piece of timber has been used for the whole shaft which is particularly noticeable with ash shafts where the enhanced grain will `match up` either side of the joint. 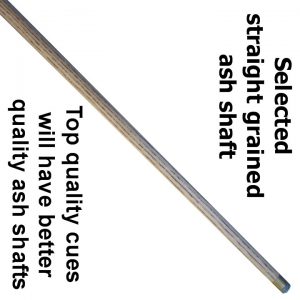 Most of our two piece snooker cues have a tip size of between 9.5mm and 10mm, and most of the shafts are made from ash though there is still a small market for Maple. Maple has always been preferred by those playing 9 ball pool, but the shafts are generally thicker. In 9 ball tips go up to 12mm so the maple shafts are more likely to remain straight whereas the thinner shafts used for snooker means ash is the preferred timber used by most cue makers. The straighter grain of the more expensive cues is a sign of a good shaft that will not warp if looked after. Having said this, with the increased use of timbers and the growing popularity of snooker in China, straight grained ash is becoming increasing difficult to come by. 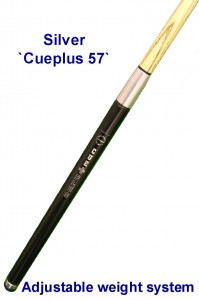 As well as top quality `Machine spliced` and `Hand spliced` cues we also manufacture and sell our `Cue+Plus 57` Telescopic snooker cues. These cues not only have a built-in extension so the player can extend the cue by up to 12 inches with a simple twist of the wrist, but they also come with an adjustable weight system. These cues are developed and made by ourselves at Blue Moon Leisure in the U.K and are only sold direct so they are excellent value for money. For players who prefer the traditional style of cue this model might not be for you but if you would like to know more about these cues CLICK HERE, you might be surprised.