(article in The New Indian Express) 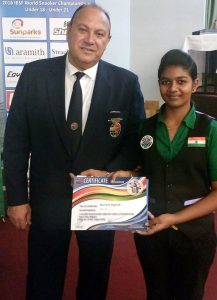 This 15-year-old girl returned to Coonoor on Sunday after bagging this covetable position at ‘World Under 21 Women Snooker Championship’ organised by International Billiards and Snooker Federation (IBSF) at Mol in Belgium.

“I am happy to have exhibited marked improvement in performance over my debut in this championship at Russia last year which has instilled adequate confidence in me to win titles for India in future. I will be focussing on the nuances gained by this international participation to hone up my performance in coming tournaments”, she told Express.

“The Billiards and Snooker Federation of India had selected Mariam Agnish to represent India in this world championship based on her ranking in the National tourneys. She is the only cue-game sports person from Nilgiris all these years to have represented the country in an official international match abroad”, noted her father-cum-coach AJS Kumar.